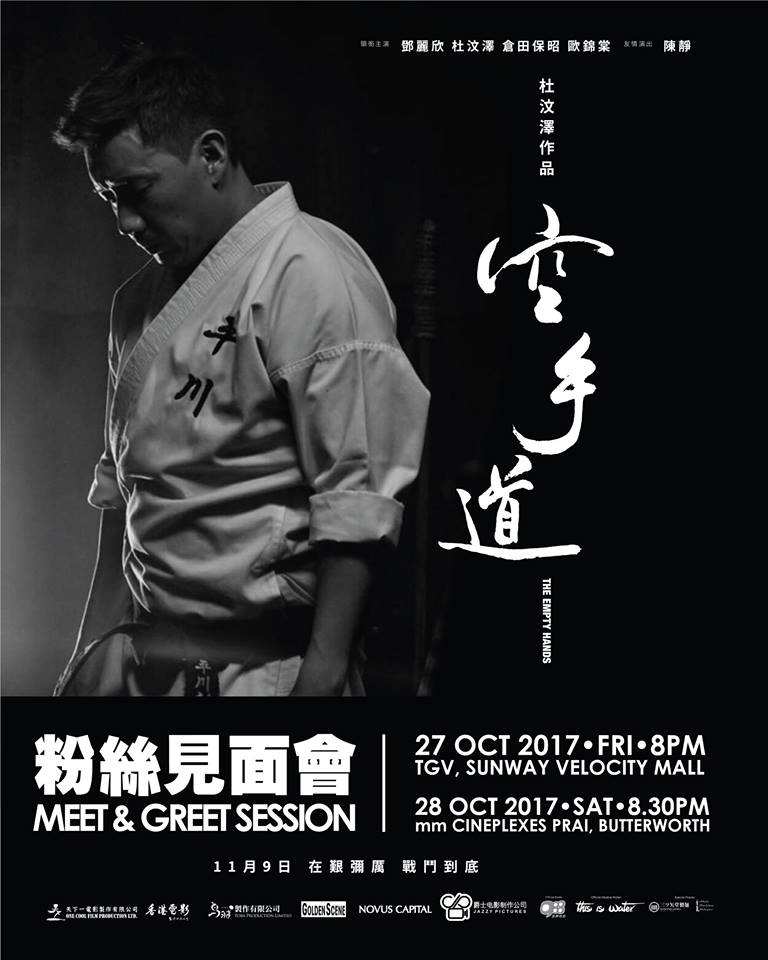 CHAPMAN TO READY FOR SERIOUS TOPIC

“THE EMPTY HANDS” AWAITS YOU IN THE CINEMA!

Jazzy Pictures second distributed film – “The Empty Hands” had a meet and greet on October 27, 2017 (Friday) at TCV Sunway Velocity Mall at 8:00 PM. From the support from few local artist, which include, Steve Yap, Jacky Kam, Joey Leong, and more. Chapman To is set to grace Malaysian media and discuss his new film “The Empty Hands”.   The meet and greet had pushed in a large crowd of people in and it was out of our expectation. Chapman To eventually talked about his character in the movie, “The Empty Hands”, as Chan Keung and his experience as the director as well. He highlighted that it was a chaos to direct movie in Hong Kong. In the process of the movie, he had to use quite a number of stunt man. During the Q & A session, Chapman To was questioned “ Why should people watch “The Empty Hands”? “and he answered “because it was filmed by him”. He brought in a joke as well saying that, the title “The Empty Hands” is named in Chinese and the English title was Google translated. He even thanked Google before he left. “The Empty Hands” is an upcoming martial arts-themed film that led by the renowned actress, Stephy Tang. “The Empty Hands” tells the story of a young girl – Mari Hirakawa whose only wish is to sell her father’s karate dojo when he dies, but discovers that the business was left to one of his worst pupils. The cause of her father’s death and break up with her love one has made her felt hopeless and had depression. She met Chan Keung, his father’s worst pupil and he make her stands up and challenge herself by continue Karate again. The film has raised the concern and attention of the public even when the movie has not been release yet. The director of the movie, Chapman To is also serves as co-screenwriter, co-producer as well as staring in the film. Apart from these heavy responsibility, he even serves as a material arts director in “The Empty Hands”.  Stephy Tang, the main actress in the movie had trained with Stephen Au in martial arts, including both karate and Muay Thai in order to be prepared for the lead role. Tang had accepted few months of tough training since she had to handle a lot of fighting scene in this movie but she enjoyed the experience so much she wants to continue learning martial arts after shooting the film. In addition, Chapman also invited Stephen Au, the Hong Kong Karate Contest Champion for his movie. Yasuaki Kurata, the famous Japanese Martial Arts Master has also starring in “The Empty Hands”. He is not only an outstanding actor for action movies, Kurata is Chapman’s Karate Master as well. Distributed by Jazzy Pictures, “The Empty Hands” will be releasing on November 9, 2017 (Thursday) at the specified cinemas. For more information, please visit Jazzy Pictures’s official Facebook page or email to jazzypictures1600@gmail.com for more details.