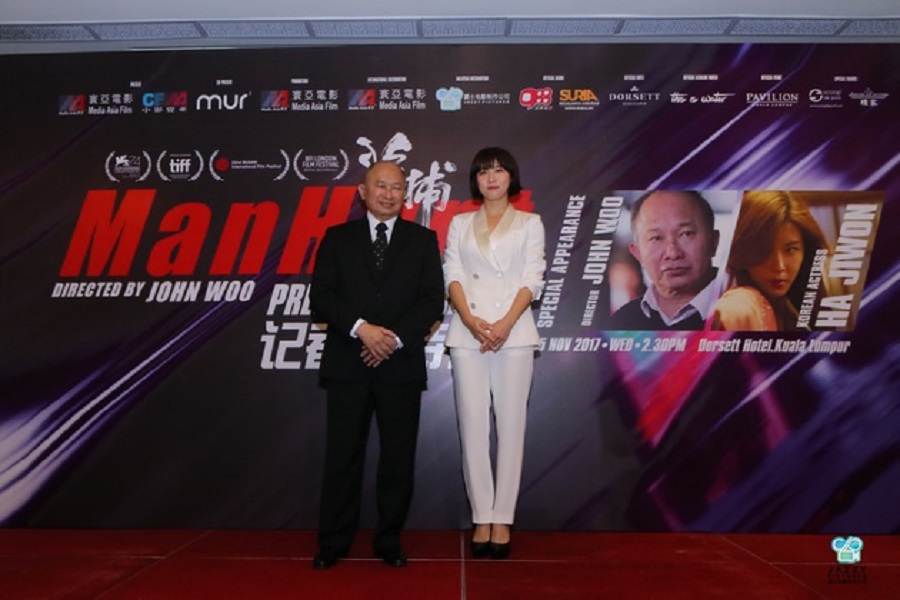 KUALA LUMPUR, 15th November 2017 – Distributed by Jazzy Pictures, the renowned director, John Woo together with Korean actress, Ha Ji Won who is the main actress in <Manhunt> had a press conference on 15th November 2017(Wednesday), 2:30 pm at Dorsett KL as well as a meet and greet session at 7pm, Pavilion KL. <Manhunt> has been a film with highest concerned production and Malaysia is honored to be the first country to hold a movie premiere.   Director Woo has praised Ha Ji Won in the press conference as she presents herself very well during the shooting process especially during the fighting scenes. He added a joke after being asked if he could demonstrate, he said he could even jump from one end to another when he was young. Talking about his daughter, he praised his daughter who acted as the partner of Ha Ji Won and there is a bond made in between them that leads quite a success to the movie shoot. The meet and greet had pushed out a large crowd of people in and it was out of our expectation. There are crowded fans waiting for Director John Woo and Ha Ji Won which included fans from different countries who took initiative to fly over to Malaysia just to meet Ha Ji Won. Ha Ji Won said that she was nervous when meeting director John Woo for the first time and she respected him very much. Before they left, they had a big photo session with the crowd appeared at the meet and greet at Pavilion KL. <Manhunt> which is a remake of the 1976 Japanese classic action thriller movie, which is based on the Japanese pulp novel Hot Pursuit by Jukô Nishimura. The story is about an innocent man who sets out the clear his name after he is framed for robbery and rape. The film was received as world premiere at the 74th Venice International Film Festival, 42nd Toronto International Film Festival and premiere at 22nd Busan International Film Festival.      With the accumulation for reputation and market of “violent aesthetics”, John Woo has succeeded played his fame spread throughout the world. He has filmed a lot of Hollywood movies; he even rolling about in the film industry for a half century. John Woo also became a proud of Chinese as he was presented with a Golden Lion award for a lifetime achievement at the Venice International Film Festival in 2010. Although those films which directed by John Woo mostly are full of violence, but the heroes in the movie are always bleeding and tears. The popular Korean actress, Ha Ji Won has played a lot of roles on both the big and small screens, including the internationally popular drama, <Secret Garden>, <Hwang Jini>, <Haeundae>, and <Empress Ki>. She also played roles in various genres such as action, comedy, horror and more. Ha has her first time to play a female killer in a John Woo’s film. The award-winning Chinese actor, Zhang Han Yu played minor role in some television series before appearing supporting characters in films directed by Feng Xiao Gang, such as <Cell Phone>, <A World Without Thieves>. For more information, please visit Jazzy Pictures’s official social media or email to jazzypictures1600@gmail.com.